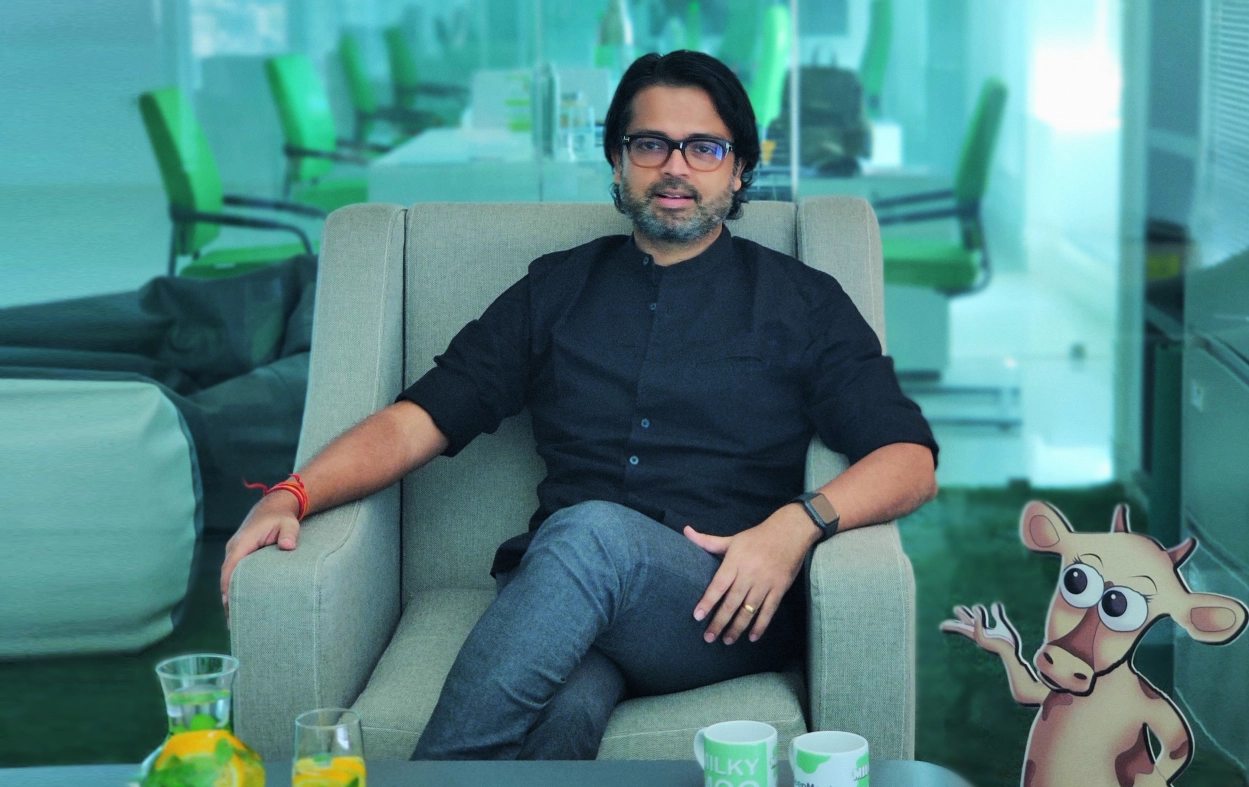 Milk Mantra to target INR 1000Cr. Revenue in the next 5 years.

he company, which is rapidly expanding in eastern India, promoted COO Sandipan Ghosh as the MD and CEO this year; founder Srikumar Misra takes on the role of executive chairman.

Milk Mantra expects to quadruple its revenue in the next four-five years to ₹1,000 crore as it expands across eastern India both online and offline, says founder Srikumar Misra.

The Bhubaneswar-headquartered dairy company said it suffered distribution disruptions and took a hit on sales during the Covid-19-induced lockdowns this year and in 2020, but it kept expanding despite the pandemic. Milk Mantra also launched its subscription-based app, Daily Moo, and opened 60 Moo Booths—its tech-enabled, franchisee-operated dairy booths that stock dairy goods like milk, curd, and its range of artisanal products across Bhubaneswar, Cuttack, and Kolkata. All of these helped the company achieve a 4% growth in revenue to ₹236 crore in FY21, and a 10% growth in Ebitda as well. This year, it expects to cross ₹300 crore in sales.

The company, which produces and distributes milk and milk products under its flagship brand Milky Moo, has been exploring acquisition opportunities in Kolkata to expand its footprint further in the region and wants to set up its third processing plant in the city. It currently owns two dairy processing plants in Odisha.

“We are looking at having our own plant in Kolkata. We’ll acquire an existing plant and refurbish it. We raised $10 million recently from U.S. International Development Finance Corporation (DFC) and… we will be using that to expand our capacity,” Misra tells Fortune India.

For online expansion, it is betting on the Daily Moo app, focussed on breakfast deliveries and premium, artisanal products; the app saw a sharp rise in subscriptions during the pandemic, growing multifold to about 10,000 subscribers in Bhubaneswar, Cuttack, and Kolkata. Misra says the app will be enhancing its breakfast portfolio to add milk and cereals in a packaged form, and other breakfast foods meant for immediate consumption, like idli and chutney. “Over the next 12 months, we will be looking at expanding our footprint. We launched in Kolkata last month, and over the next two years, we will have a wide footprint across key eastern Indian cities,” he says.

The app was piloted early last year, and relaunched earlier this year. It has grown from 800 pilot users to more than 5,000 daily deliveries currently.

Shuffle at the top

This year, the company promoted COO Sandipan Ghosh as its new MD and CEO. Ghosh and recently appointed CFO Biswajit Mishra were also inducted into the company’s board. Meanwhile founder Srikumar Misra will be the executive chairman, a role that will allow him to decide the “strategic direction of the company”. Co-founder Rashima Misra will continue as executive director.

“We are doing a lot to make Milk Mantra omni-channel, like with the Daily Moo app. As we transform the company into something beyond a single channel, single state company, I will have strategic oversight,” Srikumar Misra says.

Ghosh was appointed the company’s COO earlier this year before being elevated to MD and CEO. Before Milk Mantra, Ghosh was the commercial and marketing director, Lactalis Group India, and has experience working in various marketing roles at food brands like Mother Dairy, MTR foods, President, and Nutrela. Meanwhile, Biswajit Mishra, who joined last year, comes with experience in the food industry as well; he was previously at Aussee Oats Milling in Sri Lanka.

Business with a ‘purpose’

As it grows, Milk Mantra wants to remain focussed on its “purpose”, that of solving the “trust deficit” between consumers and food, and providing fair value to farmers by eliminating middlemen, says Misra, who founded the new-age dairy foods company in 2009 with an aim to use technology to disrupt the agri-food sector and impact the lives of farmers through ethical sourcing.

“As we scale up, we’re really looking at focussing more on our purpose, because we believe that a higher purpose translates to higher profit.”

Bearing that in mind, Milk Mantra is building a blockchain platform in partnership with digital agriculture solution provider TraceX. Using hyper ledger technology, Milk Mantra will leverage blockchain to capture data and create records of each and every step on the way to its final products. For example, the technology will help it record when and where the milk it uses to create dairy products or sell is sourced from. This, says Misra, will enable users to scan a QR code on Milk Mantra labels using its app, and know everything about the product right down to the source of milk, the quality tests it has gone through, and more.

“The entire chain will be visible to you. This is going to be the future of food security, nutrition management. Milky Moo will be the first food brand in the country to give consumers the ability to scan products and see where it is coming from and visibility across the entire value chain,” Misra explains. The company, he says, is working with the NITI Aayog to build this platform.

“It could potentially become the de facto food and agri value chain blockchain platform for India,” Misra says, adding the product is ready to be tested and piloted with 5,000 farmers in Milk Mantra’s network.

The company, which has been focussed on ethical sourcing, is also looking to bring more transparency in its financial transactions with farmers.

For this, it is partnering with USDFC to build a digital financial services platform. The platform will enable the company to pay all their farmers directly using multiple options like digital wallets or bank transfers, as well as create a credit identity for them. “Once we’re able to build a financial identity or credit identity for the farmer and rope in financial partners and banks into the ecosystem, farmers can really then have the ability to partake in small credit,” Misra adds.