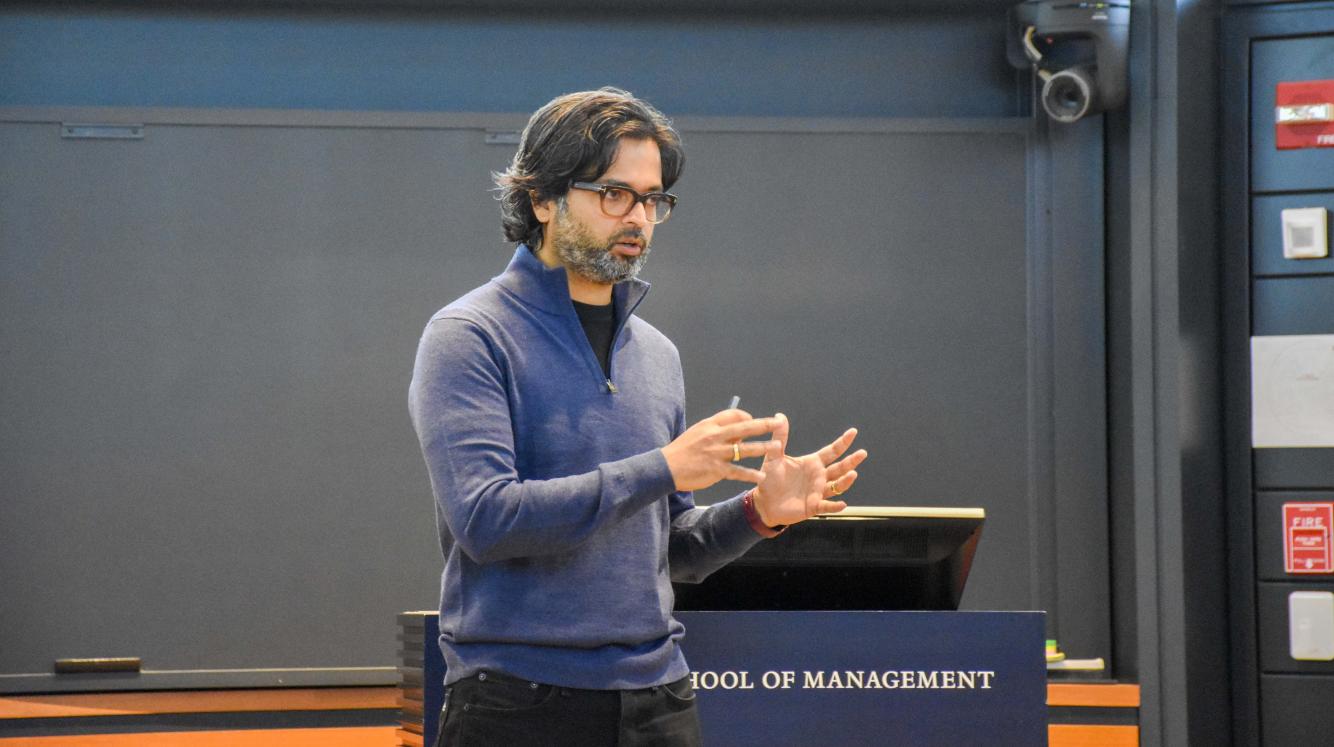 On October 27, 2021, Yale SOM’s Social Impact Lab welcomed Sri Misra, founder and CEO of Milk Mantra. From its founding, Milk Mantra has set out to balance profit with social good by bringing efficiencies of centralization and scale to the Indian dairy business, and passing the fruits of these efficiencies back to dairy farmers.

Sri has a varied background: he holds a mechanical engineering degree, an MBA, and has recently completed postgraduate studies in artificial intelligence. He is currently a Yale World Fellow and an Aspen Institute fellow. He has been an advisor to the Indian government on blockchain platforms and previously worked with the Tata Group.

Sri founded Milk Mantra in 2009 to address two primary trends he witnessed while working as a leader of food and beverage M&As at Tata. First, the Indian food value chain is very fragmented. Of the $40 billion dairy market in India, less than 15% was organized. Second, the Indian food value chain left out large swathes of people. In Odisha – where Milk Mantra was started, and Sri’s home region – there were about 100 million dairy farmers, and they were largely disaggregated. This fragmentation led to friction in the system: some dairy farmers struggled to find customers, making their income streams inconsistent and uncertain. In addition, the traditionally commoditized nature of the dairy industry in India resulted in low profit margins. This was one cause for the low, $68 average monthly income of Odisha’s dairy farmers.

Milk Mantra has cleverly begun to address these challenges by creating premium dairy products and reducing fragmentation among dairy suppliers. As opposed to the otherwise commoditized dairy market, this “premiumization” has enabled Milk Mantra to earn higher margins and to pass these benefits back to farmers. The company has partnered with 70,000 farmers in Odisha to date, and is one of the highest-margin companies in the space with an EBITDA margin of 10%. Blockchain technology has been critical to this success. With it, Milk Mantra is able to accurately track each farmer’s supply contribution and compensate them commensurately. Importantly, the company connects farmers with banking resources in order to further decrease payroll friction. Milk Mantra’s use of blockchain technology has the added benefit of maintaining appropriate milk temperatures from the beginning to the end of the supply chain, increasing consumers’ trust in the products.

Milk Mantra’s business model and efforts have resulted thus far in increasing participating farmers’ income levels by 70%. Farmers can also rely on a consistent five-day payment cycle. Because the vast majority of Odisha’s dairy farmers are women, these benefits lead to increased female empowerment as well.

While Milk Mantra has experienced success both commercially and in social impact, Sri left students with important questions to ponder regarding the broader ideals of business and society. With persistently growing income inequality, how can we ensure that capitalism is not a zero-sum game? We must focus more on “purposeful” businesses – those with social impact built into their DNA from the beginning, rather than tacked on as an afterthought. How do we turn capital into responsible capital? The answer necessarily involves both the free market and regulation. So, what is the right type of regulation and governance? These are questions that we as students at SOM should reflect and act upon, both during and after our time on campus.